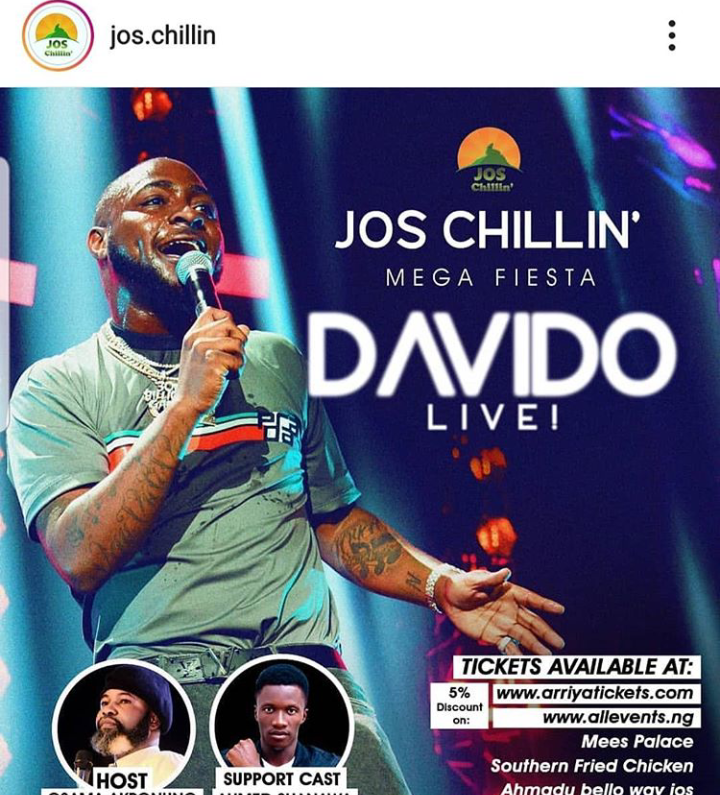 Jos Chillin' hereby tenders an unreserved apology to our esteemed guests, sponsors and partners who came out to attend and support the 2019 Jos Chillin' Mega Fiesta for the no-show of our advertised headliner, Davido.  As was the case with the three previous editions of the widely popular concert series, we had put everything in place to ensure a hitch-free production and exciting experience for our patrons.  All provisions were made and all agreed financial commitments met within agreed timelines. Davido's failure to honour his obligations to Jos Chillin' and the fans was in no way due to our failure on any count. We at the moment, await an official position from Davido's camp before announcing our next move. We remain a responsible and professional organisation with the highest regards for our patrons, partners and sponsors.  We regret the distress caused by this unfortunate incident and pledge to make it up to our aggrieved attendees who journeyed from far and near to participate in the concert experience that has in three short years, grown to be the biggest concert brand in northern Nigeria.  We would like to thank our friends and well wishers from across the country and in particular, the government and good people of Plateau State who have supported the Jos Chillin' project from day one. Jos Chillin' is a tourism promotion and human capital development initiative of Mees Palace and Buckwyld Media Network.The post Jos Chillin’ Mega Fiesta 2019: Apology For Davido No-Show appeared first on Linda Ikeji Blog.
Source: Linda Ikeji